MARTIN BENSLEY, our man on the Spree, reports from the German capital where the first of at least 200 bespoke Alexander Dennis Enviro500s are poised to take its double-deck tradition on to another generation 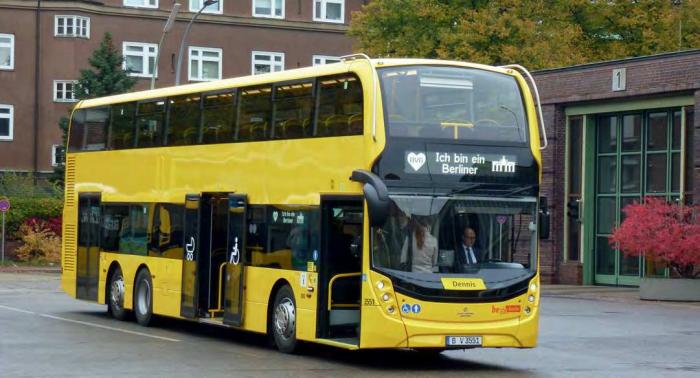 The 80-seat Berlin vehicles have three doors and two staircases.

Double-deckers have been a feature of the Berlin bus fleet for 100 years, but until now most of them have been thoroughbred German products.

That changed in October with the unveiling of Dennis and Alexandra, the first two of up to 430 bespoke Alexander Dennis Enviro500 tri-axle vehicles being bought by BVG — Berliner Verkehrsbetrieben, Berlin Public Transport Company — in what marks a new era for Germany’s largest city operator.

These products of the Larbert prototype development facility in Stirlingshire — a short distance from the Falkirk factory — are part of a framework contract signed two years ago. BVG aims to order 198 at the end of the year once an extensive testing programme has been completed with these vehicles, numbered 3550 and 3551. The first 25 production buses should arrive next year, with all 198 due in service by the end of 2022.