This is the biggest change since Caledonia opened in 2014

LEFT: Some of the 58 double-headed chargers, capable of powering 116 electric buses, in No.1 parking lye at Caledonia depot, next to the M74 Carlisle-Glasgow motorway. The building beyond is First’s regional repair centre for Scotland. 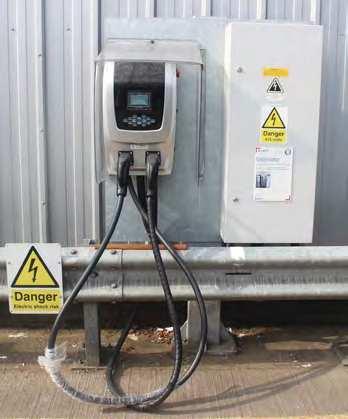 Once all 200 are in service, around 38% of vehicles at the two city depots and over a quarter of the total fleet (First Glasgow has three other depots in Lanarkshire and Dunbartonshire) will be electric. It will have achieved that within four years, less than half the time it took for Glasgow’s previous electric bus fleet —a municipal trolleybus service operated over 18 years from 1949 to 1967 — to reach its maximum size. That peaked in 1958 at just 194 vehicles.

Rapid change Seventy years ago, Glasgow Corporation drew on half a century’s experience of running one of Britain’s largest tramway systems to apply electric traction to a small part of its bus operations. Today’s electrification programme — part of a plan for a 100% zero-emission fleet — is being implemented in an organisation that has operated only diesels for more than half a century and has lived with internal combustion engines for nearly 100 years.