First South West expanded its Atlantic Coasters brand in Cornwall from 28 May to encompass five further routes – extending it seamlessly around the coast from Padstow to Marazion – using new A-prefixed route numbers.

The brand is one of a family of five new liveries – red, blue, green, pink and aquamarine – unveiled for its Kernowbranded business last year.

The A1, A2 and A3 are linked to provide an hourly circular open-top experience connecting Penzance, Land’s End, St Ives and back to Penzance. In the recent past, the A3 had been reduced to every 3hr and until this year was every 2hr. The A4 is reduced to just two journeys, 09.13 Portreath-St Ives and 18.15 back again, but becomes open-top for this year.

First has spent £150,000 on the in-house conversion of 10 Volvo B7TLs — nine with Plaxton President bodies that were new to London and one with an Alexander ALX400 body — to partial open-top layout.

Three Scania L94UB/Wright Solar singledeckers gain Atlantic Coasters livery for the A17, while four closed-top Plaxton Presidentbodied Tridents were branded last year for the A5 (former 56).

Three step-entrance open-top doubledeckers have been retained and saw limited use while the Tridents were being converted, the company taking advantage of the 20-day concession that permits limited use of vehicles that do not comply with Disability Discrimination Act accessibility requirements. 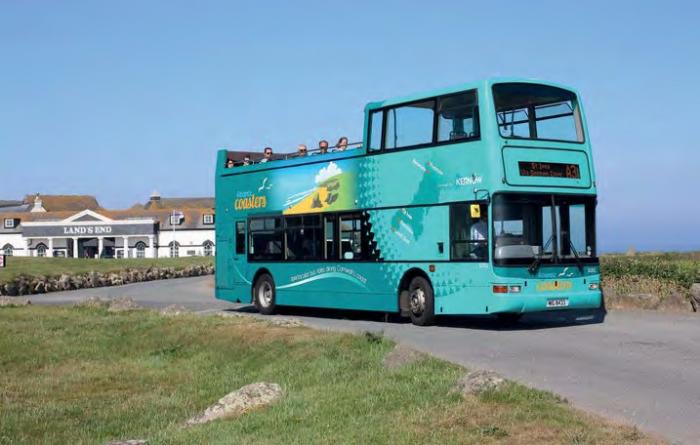 One is a Northern Counties Palatine IIbodied Volvo Olympian in Atlantic Coasters livery, which promotes the network in Penzance and is available for private hires. The other two are Alexander RV-bodied Volvo Citybuses, one of them a special events vehicle in The Buses of Somerset two-tone green, the other retained as a tree lopper.

The Falmouth open-top service 400 is unbranded using an existing two-tone green Alexander-bodied B7TL, while The Mousehole-branded service 6 (Penzance- Mousehole) has been renumbered M6.

The Buses of Somerset is expected to follow, with Somerset County Council providing a 50% grant.

Cornwall Council, in collaboration with First, also funded the redevelopment of Penzance bus station with its large canopy structure replaced by a long shelter.