Arriva London North has won contracts for three south-east London routes from Stagecoach and Go-Ahead, while the 68 group through south London is going to three separate operators.

Arriva gains the 99 (Bexleyheath-Woolwich) and 269 (Bexleyheath-Bromley) from Stagecoach Selkent and 422 (Bexleyheath- North Greenwich) from Go-Ahead London Central. Daytime frequency of the 269 will fall from six to five buses per hour, while the peak frequency on route 422 will also be widened. These services all formed part of the ill-fated Bexleybus operation, launched by London Buses in January 1988.

London Central has regained the contracts to operate routes 172 (Brockley Rise- Camberwell Green) and 343 (New Cross Gate-City Hall) from Abellio London. London Central operated the 172, introduced in 1992 to replace the southern section of the 141, until March 2011. Regular vehicles are TransBus ALX400-bodied Tridents acquired by Abellio when it assumed the contract, but which were new to Armchair for route 237 (Shepherd’s Bush-Hounslow Heath).

The 68 group of routes — 68 (Euston-West Norwood), 468 (Elephant & Castle-South Croydon) and X68 (West Croydon-Russell Square) — will each have a different operator from March. The 68 passes to Abellio along with the New Routemasters currently used on the route although the N68 (Old Coulsdon- Tottenham Court Road) will use buses from the daytime allocation on the 45 and 415.

The 468 returns to Arriva London South after 12 years and the peak hours X68 remains with London Central. The increase in peak vehicle requirement on the X68 is because of the loss of crosslinking opportunities with routes 468, 624 and 658. 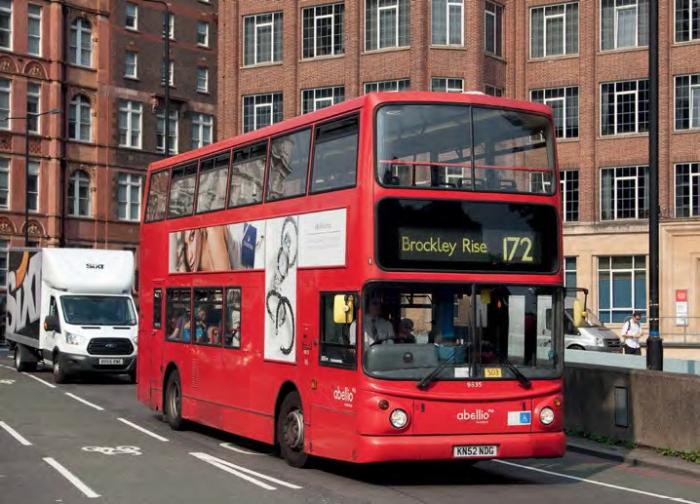 The 225 frequency will reduce from four to three buses per hour. It will use some of the Alexander Dennis Enviro200s currently on route 284 (Grove Park-Lewisham), which passes from Go-Ahead London Metrobus to Stagecoach Selkent on 17 March. The weekend night service on the 36 will reduce from every 20min to half-hourly.

Both London United and Abellio London West have retained contracts to operate routes centred on Hounslow. The H22 (Hounslow- Richmond) will receive some of the recently delivered Alexander Dennis Enviro200 MMCs currently on route 70 (Chiswick Business Park-South Kensington) when electric buses replace them early next year.

Details of the buses for routes H37 (Hounslow-Richmond) and 635 (Sunbury- Hounslow) have yet to be confirmed. The frequency of the H98 (Hounslow-Hayes End) will drop from every 8min to every 10min.