A one-off locally repowered double-decker was nearing the end of a 19-year career in 1967, but it has survived far longer in preservation as an important part of the collection of one of the foremost societies in the country

One of the highlights of a visit that Iain MacGregor paid to Lincoln in June 1967 must have been to find in service a most unusual Guy Arab III in the corporation fleet, one on its fourth engine in 19 years and about as non-standard as the other three. A bus now in the care of the Lincolnshire Vintage Vehicle Society. 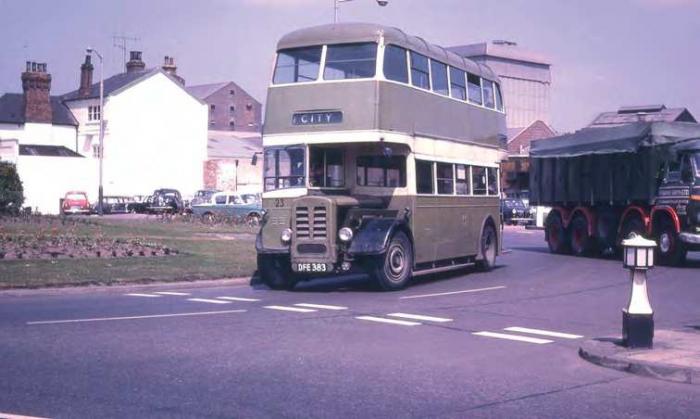 The horizontal slats helped identify Guy Arab III 23. An assortment of English-built Ford, Austin, Hillman and Rover cars is parked behind. Bollards like the one on the right of the picture would come to be recognised as a risk to life and limb and soon were replaced.
IAIN MacGREGOR

This was 23 (DFE 383), the first of ten Arab IIIs with bodywork built by Guy from Park Royal parts, and one of the manufacturer’s exhibits at the first postwar Commercial Motor Show, held at Earls Court in London in September 1948. It had some innovative features in its body including warning lights to tell drivers if a passenger had pressed the next-stop bell or if someone had fallen from the rear platform and was being dragged along behind the bus.