The company marks the occasion with a heritage bus running day as it hands the 349 service over to First. ALLAN MACFARLANE reports 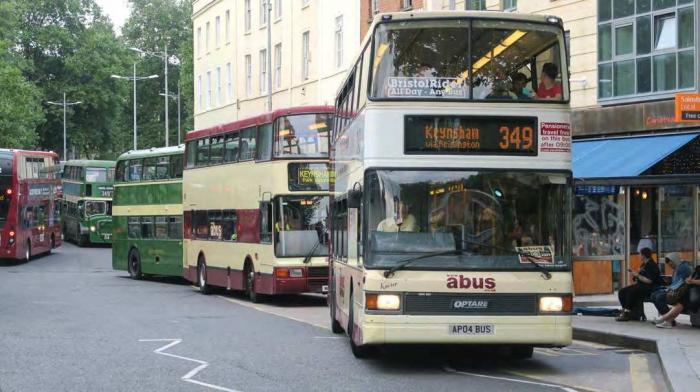 The final departure from the centre of Bristol, with Alan Peters himself driving the lead Spectra, followed by Northern Counties DAF DB250 (M645 RCP) and two Lodekkas.
MARTIN CURTIS

After 30 years of service to the people of Bristol and Keynsham, in particular, Alan Peters has retired and closed down his Abus operation.

The business was started in 1991 after bus-enthusiast Alan was made redundant from a management post at Badgerline. Alan bought an ECW-bodied Daimler Fleetline with which to start service A49 to Keynsham, to match Badgerline’s 349 –a round trip that could be completed within an hour at the time. The name Abus was chosen not only to reflect his name Alan, but because he now had ‘a bus.’ A close working relationship with Simon Munden’s Crown Coaches provided garaging, while cover for the Fleetline could be provided from Crown’s schoolbus Bristol VRs.