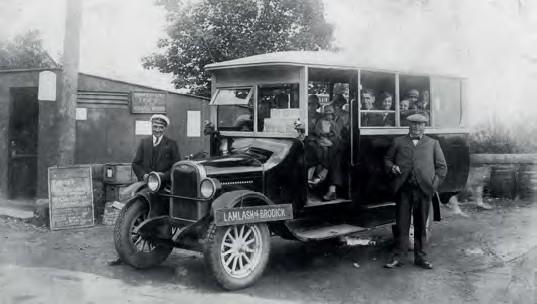 An unidentified Chevrolet 14-seater operated by Lennox, presumably in the mid-1920s, with the proprietor standing proudly beside the bus and ‘Brodick Whiting Bay every half hour’. The board adjacent to the hut reads ‘Lennox’s Red Motor Coaches Today’s Timetable - hourly till 1pm then half-hourly till 9pm, Whiting Bay- Brodick 2/- single, 3/- day return’.

Early bus service provision between Brodick and Whiting Bay on the island of Arran was a family affair, the Lennox family from Whiting Bay and Gordon Brothers from Lamlash. Lennox was running a Whiting Bay-Lamlash horse bus service by 1910, but by the mid- 1920s the two firms’ competing motorbuses ran most services between these two points. Although that competition was regulated after 1930 legislation, it continued into the 1950s, when collaborative working began as business reduced with the advent of car-carrying steamers. Lennox’s fleet was painted red, while Gordon’s were dark blue with red band and light blue roof.